A lot of interfaces use pointing as input: clicking on the screen with a mouse, pointing on a phone with your finger, or tapping with a pen are common. Since these techniques are used so often, it's good to know how much time they will take so that you can design interactive systems to be efficient. Should you have bigger buttons on a screen so they are easier to press? Or is it better to have lots of small ones close together? And how is this affected if you're in a difficult environment such as bouncing around in a vehicle or helping after a natural disaster?

The amount of time it takes to point at things on a digital device is surprisingly predictable, and we're going to explore a common way to make predictions about this based on the work of the psychologist Paul Fitts.

Try the following experiment to see how quickly you're able to point at different "targets", and think about what makes pointing slower or faster for different layouts. The experiment will collect some data that you should save in a file to analyse later. You can try it on a conventional screen using a mouse or trackpad for pointing, or on a touchscreen (including a tablet or phone) pointing with your finger or a stylus. 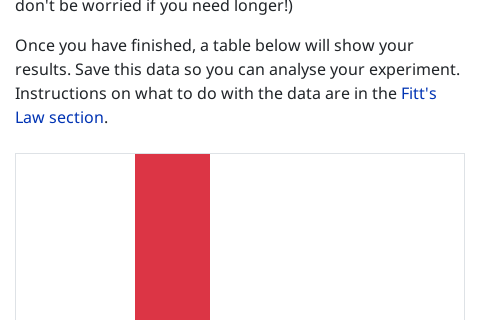 This experiment demonstrates how the amount of time it takes to point at object depends on two things:

This observation can be measured mathematically using a formula known as Fitts' law.

Fitts' law gives a formula to help us estimate how long it will take someone to click or tap at something on a screen. The thing that you're pointing at might be a button, menu, sprite, text box or something else, but the general word we use for it is the "target". When we write a formula for this, we use D for the distance to the target, and W for the "width" (size) of the target.

The of measurement don't really matter as long they are consistent - it might be pixels, centimetres or inches.

One simple prediction from Fitts' law predicts that if this ratio is the same, then the time to point at the target will be the same. For example, moving a distance of 7cm to get to a 1cm target also has D/W ratio of 7, so should take about the same amount of time as moving 14cm to a 2cm target.

However, if the ratio doubles, the time does not double. For example, if the target size stays the same, but it is placed twice as far away, it won't take twice as long to move to it - the time taken goes up only a small amount. To work this out, Fitts introduced the "Index of Difficulty" (ID), which is proportional to the time it should take to point at a target. The formula for the Index of Difficulty (ID) is shown in the following interactive. You don't need to worry too much about the details of the formula because we've also provided a calculator where you can enter the D and W values and it works out the ID value.

This is a common formula for calculating the Index of Difficulty (\(ID\)), but other formulas exist.

You can estimate how long pointing will take by using the data from the experiment above, or run it again using this link:

Save the data to a file, or copy it to the clipboard, and then load the data into a spreadsheet.

Fitts' law predicts that the time taken to point at a target will be proportional to the "Index of Difficulty". We can test this with your experimental data.

To do this with your data in a spreadsheet (Excel or Google sheets work fine), graph a scatterplot of the ID and time taken as follows:

This should produce a chart something like the following:

To make predictions from this graph, you can add a trend line to it. Here's how to do it on Excel or Google sheets:

You should end up with a graph like the following one:

This particular graph can be used to work out how long it would take someone to point at a different sized object at a different position; all you need to do is work out the ID using the formula above, and then look it up on the chart. For example, if a new button was placed with an ID of 3.0, the graph indicates that it would take about 850 milliseconds to point at it. If you make the button bigger, the ID would be less, but even the button is huge and the ID is nearly zero, you can see that for this particular user, it will still probably take at least 500 milliseconds (half a second).

It's important to note that this estimate only applies for the person and the pointing device that the experiment was done with, and of course, it's only an estimate.

The value (which is 0.721 in the graph above) tells you how well correlated the measurements are. If the value is 1, the correlation is perfect. In the example above, not all the dots are close to the line, so we can see that this experiment had a bit of variation, and therefore a lower value. You can visually see that one of the point is a long way from the line, and that may be due to something going wrong in the experiment - perhaps the person doing the clicking was distracted or slipped during that particular trial.

Fitts' law is used in designing all sorts of interfaces to predict how efficient they will be to use, and saves having to build the interface and have someone try it out.

Fitts' law applies to many forms of pointing: clicking a mouse, touching a screen, using a stylus, using a touchpad, and even moving your feet between dance pads or the brake and accelerator pedals in a car! You only need to measure how long pointing takes on your device for one or two layouts, and then you can use the formula to predict how long other layouts of the interface will take, or how long other tasks will take. As a simple example, you could measure how long it takes to dial a two-digit phone number, and from that work out how long other numbers would take to dial; for example, 565 will be a lot faster than 191, and Fitts' law can be used estimate what the difference is.

A particularly interesting example of pointing is for menus at the top of a screen. At first you might think it would be fairly slow because a menu is a small word a long way from other places on the screen. However, if you 'overshoot' when pointing to the top of the screen, the cursor stays at the top. This means that the size of the target is actually very big and users can be fairly careless about pointing exactly at the menu word. Based on Fitts' law, if the target is very big, it will be very fast to point at, making this some of the most valuable real estate on the screen!

Sometimes pointing at objects in a device is difficult, particularly if you are being bounced around in a vehicle. Imagine you're on a fire engine racing through traffic, or a plane being bounced around by turbulence. In these situations, operating devices to find a route or get information is critical, yet the environment can make it challenging.

Try the following interactive where you'll get to experience this firsthand. 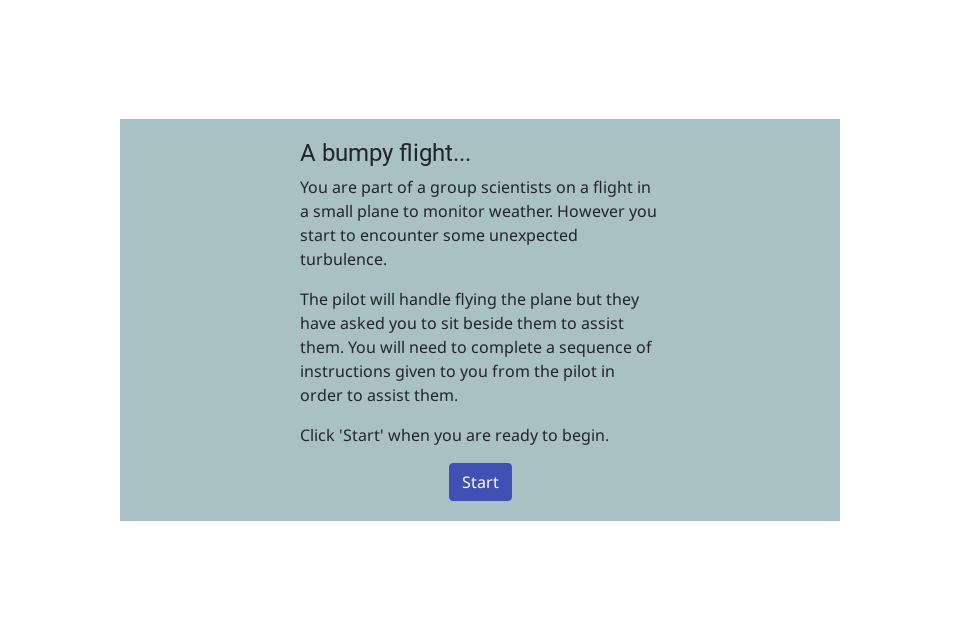 The basic ideas from Fitts' law still apply in this situation, but things are a whole lot harder.

For a more controlled experiment on how shaking affects the index of difficulty, the following interactive lets you try clicking on a button while the interface is moving around. It's hard work, but this will give you insight into how people need to design interfaces for people working in difficult environments where they are moving around a lot! 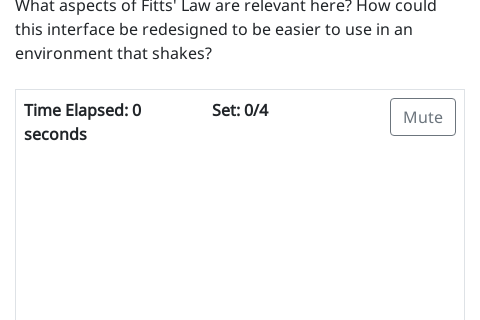 This kind of experiment is used to inform people making mobile devices, such as a radio that police or firefighters would use while driving or working in a dangerous situation. They also need to take into account factors such as the user wearing safety equipment like gloves and helmets. An ordinary mobile phone interface just won't work in those situations!

Solutions to this problem including providing anchor points on a touch screen to rest you hand on, having larger targets, and a simpler interface (such as "push to talk" on a radio, rather than dialling a number).