Images can take up a lot of space, and most of the time that pictures are stored on a computer they are compressed to avoid wasting too much space. With a lot of images (especially photographs), there's no need to store the image exactly as it was originally, because it contains way more detail than anyone can see. This can lead to considerable savings in space, especially if the details that are missing are the kind that people have trouble perceiving. This kind of compression is called lossy compression. There are other situations where images need to be stored exactly as they were in the original, such as for medical scans or very high quality photograph processing, and in these cases lossless methods are used, or the images aren't compressed at all (e.g. using RAW format on cameras).

In the data representation chapter we looked at how the size of an image file can be reduced by using fewer bits to describe the colour of each pixel. However, image compression methods such as JPEG take advantage of patterns in the image to reduce the space needed to represent it, without impacting the image unnecessarily.

The following three images show the difference between reducing bit depth and using a specialised image compression system. The middle image is the original, which was 24 bits per pixel. The left hand image has been compressed to one third of the original size using JPEG; while it is a "lossy" version of the original, the difference is unlikely to be perceptible. The right hand one has had the number of colours reduced to 256, so there are 8 bits per pixel instead of 24, which means it is also stored in a third of the original size. Even though it has lost just as many bits, the information removed has had much more impact on how it looks. This is the advantage of JPEG: it removes information in the image that doesn't have so much impact on the perceived quality. Furthermore, with JPEG, you can choose the tradeoff between quality and file size.

Reducing the number of bits (the colour depth) is sufficiently crude that we don't really regard it as a compression method, but rather just a low quality representation. Image compression methods like JPEG, GIF and PNG are designed to take advantage of the patterns in an image to get a good reduction in file size without losing more quality than necessary.

For example, the following image shows a zoomed in view of the pixels that are part of the detail around an eye from the above (high quality) image.

Notice that the colours in adjacent pixels are often very similar, even in this part of the picture that has a lot of detail. For example, the pixels shown in the red box below just change gradually from very dark to very light.

Run length encoding wouldn't work in this situation. You could use a variation that specifies a pixel's colour, and then says how many of the following pixels are the same colour, but although most adjacent pixels are nearly the same, the chances of them being identical are very low, and there would be almost no runs of identical colours.

But there is a way to take advantage of the gradually changing colours. For the pixels in the red box above, you could generate an approximate version of those colours by specifying just the first and last one, and getting the computer to calculate the ones in between assuming that the colour changes gradually between them. Instead of storing 5 pixel values, only 2 are needed, yet someone viewing it probably might not notice any difference. This would be lossy because you can't reproduce the original exactly, but it would be good enough for a lot of purposes, and save a lot of space.

The JPEG system, which is widely used for photos, uses a more sophisticated version of this idea. Instead of taking a 5 by 1 run of pixels as we did above, it works with 8 by 8 blocks of pixels. And instead of estimating the values with a linear function, it uses combinations of cosine waves.

Each 8 by 8 block of pixels in a JPEG image can be created by adding together different amounts of up to 64 patterns based on cosine waves. The waves can be represented visually as patterns of white and black pixels, as shown in the image below. 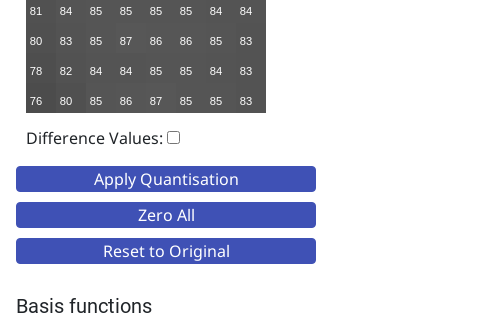 So 64 pixels (in an 8 by 8 block) can be represented by 64 coefficients that tell us how much of each basis function to use. But how does this help us save space and compress the image? At the moment we are still storing exactly the same amount of data, just in a different way.

The figure below shows an image before and after it has had quantisation applied to it.

Notice how the images look very similar, even though the second one has many zero coefficients. The differences we can see will be barely visible when the image is viewed at its original size.

Try this out yourself:

We still have 64 numbers even with the many zeros, so how do we save space when storing the zeros? You will notice that the zeros are bunched towards the bottom right. This means if we list the coefficients in a zig-zag, starting from the top left corner, we will end up with many zeros in a row. Instead of writing 20 zeros we can store the fact that there are 20 zeros using a method of run-length encoding very similar to the one discussed earlier in this chapter.

And finally, the numbers that we are left with are converted to bits using Huffman coding, so that more common values take less space and vice versa.

All those things happen every time you take a photo and save it as a JPEG file, and it happens to every 8 by 8 block of pixels. When you display the image, the software needs to reverse the process, adding all the basis functions together for each block – and there will be hundreds of thousands of blocks for each image.

An important issue arises because JPEG represents images as smoothly varying colours: what happens if the colours change suddenly? In that case, lots of values need to be stored so that lots of cosine waves can be added together to make the sudden change in colour, or else the edges of the image become fuzzy. You can think of it as the cosine waves overshooting on the sudden changes, producing artifacts like the ones in the following image where the edges are messy.

The original had sharp edges, but this zoomed in view of the JPEG version of it show that not only are the edges gradual, but some darker pixels occur further into the white space, looking a bit like shadows or echoes.

For this reason, JPEG is used for photos and natural images, but other techniques (such as GIF and PNG, which we will look at in another section) work better for artificial images like this one.