The main idea of Ziv-Lempel coding is that sequences of characters are often repeated in files, so instead of storing the repeated occurrence, it is replaced with a reference to where it occurred earlier in the file. As long as the reference is smaller than the phrase being replaced, you’ll save space, and this is how we get compression. Typically the systems based on the Ziv-Lempel approach can be used to reduce text files to as little as a quarter of their original size, which is almost as good as any method known for compressing text.

The interactive below illustrates this idea using a variation of the Ziv-Lempel approach called LZSS (Lempel–Ziv–Storer–Szymanski); you should open it in a separate window, and try it out while reading the description below. 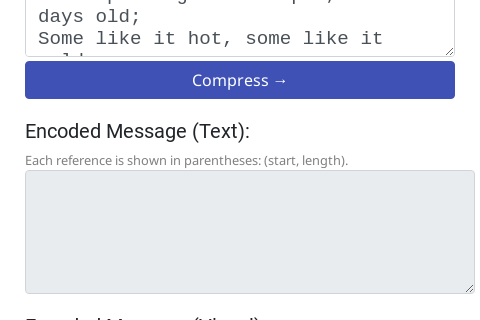 In LZSS, a reference to where some text occurred before is actually two numbers: the first says where the referenced phrase starts, and the second says how long the referenced phrase is. Each reference typically takes the space of about one or two characters, so the system makes a saving as long as two characters are replaced. Of course, all characters count, not just letters of the alphabet, so the system can also refer back to the spaces between words. In fact, some of the most common sequences are things like a full stop followed by a space.

This approach also works very well for simple images, since sequences like "10 white pixels in a row" are likely to have occurred before. Here are some of the bits from the example image earlier in this chapter; you can paste them into the interactive above to see how many pointers are needed to represent it (in this example there's just one bit for each pixel because the image has only two colours, but in practice LZ methods are likely to code images with a bigger range of pixel colours, such as 8-bit pixels with 256 different colours).

What you just tried is essentially what happens with PNG images; the pixel values are compressed using a similar Ziv-Lempel algorithm, which works well if you have lots of consecutive pixels that are the same colour. But it works very poorly with photographs, where pixel patterns are very unlikely to be repeated exactly. For example, in the following row of pixels from a photo nearly all of them are the same colour, yet the number representing the colour value fluctuates slightly, so there aren't many repeated patterns that an LZ method would pick up:

In contrast, the following zoomed in image from a cartoon has a lot of repeated pixel colours:

In the next section we’ll take a look at a variation of “Ziv-Lempel coding” creatively called “Lempel-Ziv-Welch coding”, which is often referred to as LZW to make things easier. LZW uses a dictionary-like structure based on key and value pairs – these are based on the metaphor of looking up a word (key) and its definition (value) in a dictionary, but in this case the key is a number, and the value is a phrase of text that it represents. The phrase might be as small as two characters, or could be a few words. The dictionary keeps track of phrases it has encountered and gradually adds new ones to the dictionary.

Let's think about how to use a dictionary for compression. Here's a short dictionary with 4 entries, numbered from 0 to 3 (the last entry in the dictionary is a comma):

You can try creating your own dictionary for some text in the following interactive – see how few dictionary entries you need to cover as much of the text as possible. 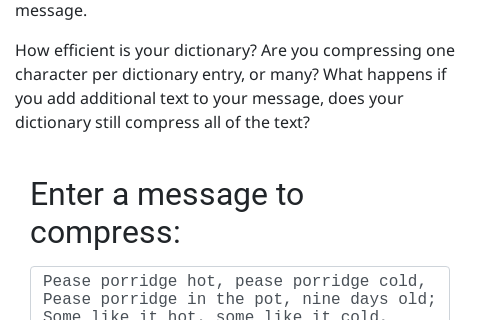 The interactive below demonstrates LZW compression. You might want to have it open in a separate window to try things out while you read how it works below. 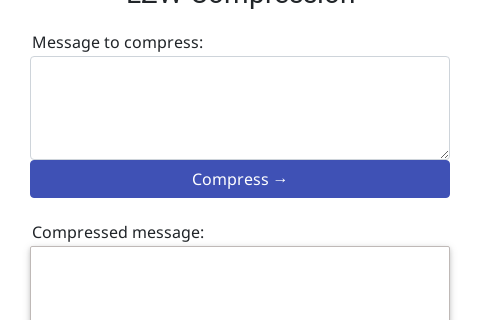 Initially the LZW encoder begins with a dictionary that can store up to 4096 strings of characters. Codes 0 to 255 represent single character sequences (the alphabet, punctuation, etc). The codes will need to be stored as binary numbers, therefore each code needs 12 bits to represent it in order to represent a total of 4096 entries (since 12 bits allows us to represent 4096 different values).

As the message is being compressed, at each step the encoder adds a new string of characters to the dictionary (filling in dictionary spots 255 - 4095). Let’s use an example to step through how this happens. This is the message we are wanting to encode:

In this case, this is our initial dictionary (usually we would use 255 characters, as mentioned above, but let’s just keep things simple and only use the four characters in our string):

We use this dictionary to start encoding the message from the first character.

We then proceed to the next character in the message, adding a new sequence to the dictionary each with each step:

When we have finished encoding the string, we now have a dictionary that looks like this:

To see just how much compression we achieved, let’s take a look at the binary behind the characters. We'll assume that the characters are coded in 8 bits each (this is typical), based on UTF-8 coding (which is the same as ASCII for these characters). In binary, originally our message looked like this:

The uncompressed version has 12 characters, each using 8 bits, so there are 92 bits used to store it.

And this is the compressed message:

The compressed version shown here uses only 9 LZW codes, but each is 12 bits each, so this version would use 108 bits. This is more than the original, although we'll see later on (check out the "Representing the codes in fewer than 12 bits" panel at the end of this section) that there's an easy trick that can be used to reduce this to just 3 or 4 bits per code, so it would use no more than 4 x 9 = 36 bits, which is less than 40% of the original size.

We were encoding quite a short message, so the longest sequence in the dictionary is just three characters. The longer the message that we are encoding, the longer these sequences can get, therefore allowing us to potentially represent reasonably long substrings with just one code, resulting in effective compression. You can see this for yourself in the LZW compression interactive below:

Decoding a message from LZW is a little tricky, but makes an interesting puzzle. The main point is that anything that has been encoded can be decoded to exactly the same as it was before it was compressed, but here's an illustration of how it works in case you're curious about how it's even possible. Let’s now try to decode our encoded message.

The decoder starts with the same initial dictionary of single characters as the encoder (again, usually we would use 255 characters, but we’re keeping things simple and only using the four characters used in our string):

The encoded message is as follows (we've shown each 12-bit code as a decimal number):

The initial dictionary has values for codes 0 - 3, so what is the decoder meant to do when it gets to 4? Well, at each step it makes an addition to the dictionary, just as the encoder did. We’ll walk through this step by step:

The first code in the encoded message is 0. 0 is in the initial dictionary, so 0 is decodes to the letter I with the corresponding sequence (I), so our message now looks like this:

The decoder knows that I followed by the next character must be the next string to add to the dictionary.

We then continue to the next character:

In step 2, the code is 1, which is also in the initial dictionary so we output the corresponding value (A), so our message now looks like this:

IA is not already in the dictionary, so it is added and assigned to the code 4. The docoder’s dictionary now looks like this:

And we continue on to the next few characters in the message:

In step 5 we have to decode 5. Recall that 5 wasn’t in the initial dictionary, but since we added it in step 2 are able to decode it.

Once we have decoded the whole message we now have the following string:

So we successfully encoded and decoded the message! And this is the dictionary that the decoder created:

Notice that it is exactly the same dictionary as the encoder created – the dictionary has been reconstructed without having to send it to the decoder!