Run length encoding (RLE) is a technique that isn't so widely used these days, but it's a great way to get a feel for some of the issues around using compression.

Imagine we have the following simple black and white image.

One very simple way a computer can store this image in binary is by using a format where '0' means white and '1' means black (this is a "bitmap", because we've mapped the pixels onto the values of bits). Using this method, the above image would be represented in the following way:

The key question in compression is whether or not we can represent the same image using fewer bits, but still be able to reconstruct the original image.

It turns out we can. There are many ways of going about it, but in this section we are focussing on a method called run length encoding.

Imagine that you had to read the bits above out to someone who was copying them down... after a while you might say things like "five zeroes" instead of "zero zero zero zero zero". This is the basic idea behind run length encoding (RLE), which is used to save space when storing digital images. In run length encoding, we replace each row with numbers that say how many consecutive pixels are the same colour, always starting with the number of white pixels. For example, the first row in the image above contains one white, two black, four white, one black, four white, two black, and one white pixel.

This could be represented as follows.

You might ask why we need to say the number of white pixels first, which in this case was zero. The reason is that if we didn't have a clear rule about which to start with, the computer would have no way of knowing which colour was which when it displays the image represented in this form!

This is coded as:

That means we get the following representation for the first three rows.

You can work out what the other rows would be following this same system.

Converting run length encoding back to the original representation

Just to ensure that we can reverse the compression process, have a go at finding the original representation (zeroes and ones) of this (compressed) image.

What is the image of? How many pixels were there in the original image? How many numbers were used to represent those pixels?

The following interactive allows you to experiment further with run length encoding. 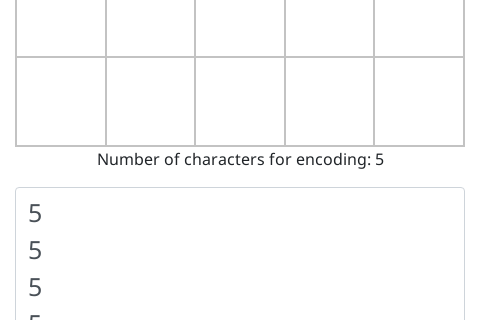 How much space have we saved using this alternate representation, and how can we measure it? One simple way to consider this is to imagine you were typing these representations, so you could think of each of the original bits being stored as one character, and each of the RLE codes using a character for each digit and comma (this is a bit crude, but it's a starting point).

Where is run length encoding used in practice?

The main place that black and white scanned images are used now is on fax machines, which use this approach to compression. One reason that it works so well with scanned pages is that the number of consecutive white pixels is huge. In fact, there will be entire scanned lines that are nothing but white pixels. A typical fax page is 200 pixels across or more, so replacing 200 bits with one number is a big saving. The number itself can take a few bits to represent, and in some places on the scanned page only a few consecutive pixels are replaced with a number, but overall the saving is significant. In fact, fax machines would take 7 times longer to send pages if they didn't use compression.