Depth is a critical part of computer vision, which gives the computer information about the distance of objects to the camera. Depth is used in applications like video games, such as Microsoft's Kinect, and aerial surveys. Another significant application is self-driving cars, which need to know how far away the vehicle ahead of it is to avoid collisions. One way of obtaining depth information is through stereo vision, which uses two cameras, usually side by side. Both cameras take a picture of the same scene. Objects that appear in both images will be at different positions, where the disparity is the difference between the positions. Objects close to the cameras will have a larger horizontal disparity in the images, whereas faraway objects will have a smaller disparity. Humans and many other animals also use this technique to obtain depth information. Each eye sees a slightly different image which the brain uses to tell whether an object is close or far away.

One possible method of programmatically obtaining the distance to an object from stereo images is detailed below. Other methods may provide better or worse results, but the following one is (relatively) simple. For those looking to learn more, the full paper this was inspired by can be found here. This section only considers the situation where the object is horizontally between the two camera positions.

Calculating the angle of view

An aspect of the camera we need to know is its angle of view. This value is the horizontal angle that the camera can see. If you cannot find the technical specifications of your camera, there is an easy way to obtain this. Prop a ruler up horizontally. Then, take a picture of the ruler, aligning the start of the ruler with the left edge of the photo. Ensure that ruler fills the entire photo (the right end is not visible). Also, measure the distance between the camera and the ruler (e.g. by using another ruler). An example picture is shown below.

As seen in the diagram above, finding the angle of view becomes a simple trigonometry problem. We derive the following equation for calculating the half angle of view.

Calculate the angle of view

Typically, a stereo vision system would use two identical cameras, but you can simulate this with one camera by taking two photos of a still object. Take two stereo pictures of an object where it is between the two camera positions. Use the same camera to take both images. The diagram below shows the setup. For both pictures, the camera should be pointing in the same direction such that the axes of view are parallel (or as close as you can get). A possible way of ensuring they are as parallel as possible is to align the camera with a straight line on the floor. Note down the distance between the camera positions and the actual distance to the object with rulers or measuring tape.

The following interactive shows the equation in action. 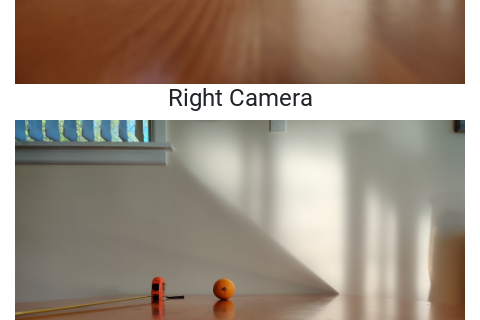