The regular languages that we looked at in previous sections are great for some common applications, but they can’t do the kind of processing needed to create programming languages and some other important applications. For these we need grammars, which are more powerful than regular expressions. In this section we’ll look at a particularly useful kind of grammar called the “context-free grammar”, or CFG. Don’t worry too much about the long name; “context-free” just refers to what it can’t do. A CFG is fairly simple, but it can achieve a lot of important work for us.

Bear in mind that the whole point of formal languages is that they make complicated things easy to do. CFGs are widely used in computer science to write new programming languages, and to implement markup languages like HTML and XML. They are very powerful because they allow a complicated system (like a compiler, or HTML display software) to be specified in a very concise way, and there are programs that will automatically take the grammar and build the system for you. The grammars for conventional programming languages are a bit too unwieldy to use as initial examples (they usually take a few pages to write out), so we're going to work with some small examples here, but we’ll include parts of the grammars that are used for programming languages.

Starting off with a simple grammar

To show you how grammars work, we’re going to make you do the work that we’d normally get a computer to do with a grammar. The ones we’ll start with are just “toy” examples; they’re simpler than most grammars that are used in practice, but they’re a good stepping stone. Watch this video for a demonstration of the system we’ll use.

Now it’s your turn to experiment with a grammar! In the interactive below you’ll see a large “S” in the middle. Clicking on the S lets you replace it using one of the two rules (the technical name for the substitution rules is productions). See if you can work out the productions you need to choose to generate the text in the white box - the generated text will show a green background if you get it right. The “History” box will show the sequence of productions that you used. Hint: you can get different challenges by clicking on the “Next” button. Hit the “Reset” button to start over. 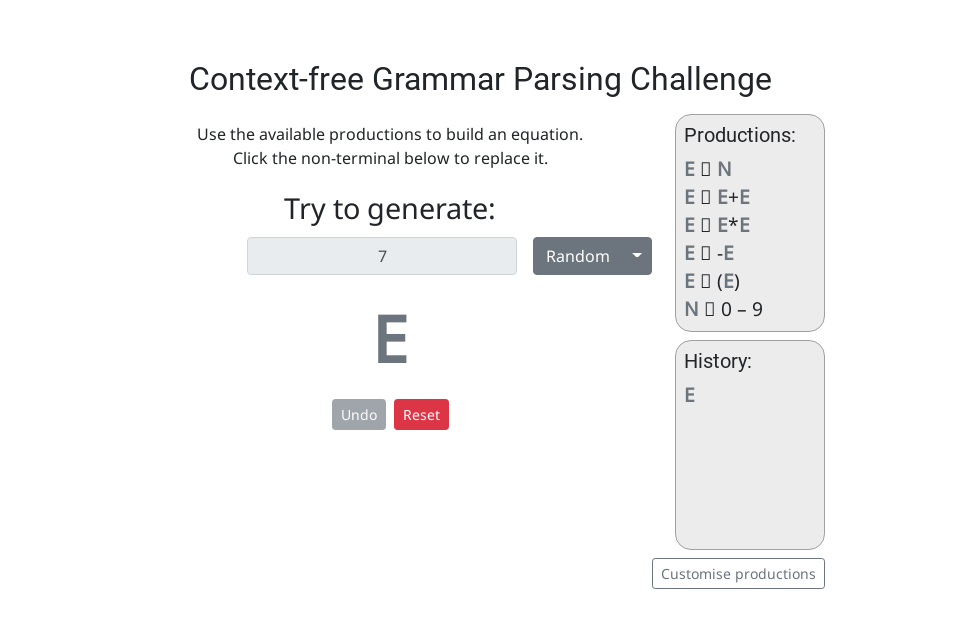 The examples you’ve tried so far are all strings of characters that are valid in the language. Try solving this challenge - can you make the string “a” or “abaa” using the productions given?

For example, the following Python code has a red underline at the end of the line:

This is because the grammar requires a colon (:) at the end of the for command, but it got the end of the line instead. Every time you get a syntax error in a program, it is an example of a grammar at work.

As mentioned earlier, the rules, such as “S → aSa”, are called productions. In this case, the whole process starts with an “S”, and ends up producing a mixture of “a”s and “b”s. The characters “a” and “b” are called terminals because they can’t be replaced by anything - they are a terminal state. “S” is called a “non-terminal” because it is on the left hand side of a production, and will be replaced with something else. In most of our examples, non-terminals are written as a capital letter, and terminals are in lower case.

The productions you are working with accept strings of characters that have a particular pattern. A string is accepted if there’s a way to generate it with the grammar. Can you give an English description of what kind of pattern the grammar above accepts?

Here’s a different grammar that you can try out:

How would you explain the kinds of strings that this accepts?

Now here are some more challenges. Note that the first production produces two “S” non-terminals, and although they are both called “S”, they don’t have to be the same.

The grammar above is a bit more complicated to describe in English, but you’ll probably get an idea of what sort of strings it accepts after you’ve tried a few examples.

The grammars we’ve used so far might not be directly useful, but hopefully you get the feel for how the productions in a grammar work. Productions are used to check if the string you have is accepted by the rules of the grammar. As with regular languages in the previous section, a string is either accepted by the grammar, or not. For example, in the first grammar above, “aaabaaa” is accepted, but “bba” isn’t. If you are given a string that isn’t in the grammar, then you won’t be able to find any combination of productions that can be used to create it.

An important thing about CFG productions is that they can be used to check rules that a regular language can’t (Remember that regular languages use regular expressions and finite state automata). You won’t be able to build an FSA that checks that the number of “a”s before the “b” is the same as the number after it - try to create one and you’ll see the issue!

We sometimes explain how a string was parsed using a parse tree. We’ll use this grammar as an example:

The following parse tree shows how you could use it to produce the string “abaabb”. It starts with S at the top, and each branch in the tree (arrow) represents a production being used to replace a non-terminal. For example, the top two arrows show S → SS, and the three-way branch from the right-hand S shows S → aSb (with the middle S then having its own two branches).

Expressions are used in both programming languages and spreadsheets. For example, a program might contain this statement, which adds one to the variable score:

The expression in this statement is score + 1 - it’s just a calculation.

The following expression calculates the area of a rectangle:

And the following expression might be used in a program to calculate the cost of a purchase:

The first pair of brackets isn’t necessary, but they’ve been put in to make it easier to read.

Even the following is accepted in most programming languages, though the brackets aren’t very helpful:

The regular languages we used in earlier sections can’t keep track of nested brackets, but context-free grammars can.

We’re going to simplify things to start with by giving you a grammar that accepts simple expressions that only have single digit numbers. All of these expressions could be typed into a language like Python, and should perform the calculation correctly (you could also type them into a spreadsheet, with an “=” sign at the front). The following examples are valid expressions:

But the following will cause an error:

For example, here’s what Python does with the last expression:

If you put it into a spreadsheet as =(3)) then you get an error like this:

A grammar for working out these expressions can be experimented with in this interactive. Click the next button after completing an expression to try another one.

An example string in the interactive was “(2+3)*(4+1)”, and its parse tree, which shows how to create the string using the grammar, would be as follows. At the top level, the first E uses the production E → E*E, then each of those two “E”s uses E → (E), and so on.

Grammars are used to define programming languages like Python, Java, Javascript, C, C++, C# and so on, but they also define languages like HTML and XML. When someone wants to write a program that processes files in one of these languages, they can write the production rules for the language, and then feed them into a system that automatically creates a program to process the language. (An example of a system that can read in a CFG to help build a new programming language is Bison.)

Context-free grammars are particularly useful for working with languages that allow nesting. We’ve already seen nesting when we had brackets within brackets in the expressions above. Another example that comes up in most programming languages is that you can have an “if” statement inside an “if” statement, or an “if” inside a “while” which is inside an “if”! Here’s an example of some nested “if” statements in two languages. (Note that these may not be the best way to write a program, but they are accepted by the grammar of the language.)

Usually there’s no limit to the nesting, even though it’s not great style to overuse it.

The notation we’ve been using for CFGs above is simplified to make it easy to read, but here is a link to the actual grammar for the Python language. In this notation, terminals are in quote marks. For example, the definition of an “if_stmt” (the non-terminal representing an if statement) includes:

The last line means that an “if” statement starts with the terminal “if”, then has an expression (that’s the true/false decision in an “if” statement), a colon, and a block, followed by an optional “else” block (indicated by the square brackets).

If you search the Python language grammar for the non-terminal “block:” in the grammar, you’ll see that it can be an indented group of statements, or a simple statement. If you keep following up on these, you’ll find out that a statement can (eventually) be another “if” statement. These two productions use the vertical line “|” as a shortcut to show that they are alternatives for an “if_stmt”. Grammars like this are the way that a programming language designer specifies the rules of the language.

The entire grammar for Python is only about 500 lines long, which might seem like a lot, but it’s not bad considering that it specifies the syntax rules for an entire programming language, and is able to process any Python program that anyone will ever come up with!

In the previous section we used regular expressions, which could define strings from regular languages, and could be implemented using a finite state automaton.

Context-free grammars are pretty versatile, but some slightly more powerful types of grammars are sometimes needed for some languages. Computer scientists have many variations - you may hear about things like “Context-sensitive grammars”, “parsing expression grammars” or “LL(k) grammars”. They use many of the same principles as a CFG, but are useful in particular situations. Computer scientists who design new languages and write software to process languages are able to use these tools to make the process much simpler and more reliable.

There are even more powerful languages than those mentioned here, but they are much harder to work with, and are often used to explore the boundaries of what can be done with computation.