So far we have talked about HTTP and IRC. These protocols are at a level that make sure you do not need to worry about how your data is being transported. Now we’ll cover how your data is transferred reliably and efficiently, regardless of what the data is. Below this level is an unreliable medium for transfer (such as wifi or cable, which are subject to interference errors) which causes a concern for data transportation. These protocols take different approaches to ensure data is delivered in an effective and/or efficient manner.

TCP (Transmission Control Protocol) is one of the most important protocols on the internet. It breaks large messages up into packets. What is a packet? A packet is a segment of data that, when combined with other packets, make up a total message (something like a HTTP request, an email, an IRC message or a file like a picture or song being downloaded). For the rest of the section, we’ll look at how these are used to load an image from a website.

In short, the website looks at the image and breaks it into packets. It then sends the packets over the internet to your computer. Your computer then reassembles the packets to give back to you as the image. This is demonstrated in this video.

By now you’re probably wondering why we bother splitting up packets… wouldn’t it be easier to send the file as a whole? Well, it solves congestion. Imagine you're on the passenger train to Trainsylvania, and just before it sets off a great long freight train begins lumbering out of the station. Unfortunately, Google is setting up a physical archive of its Google Earth database, and it'll be a full day before the line to Trainsylvania is next free. It would be far better to have the freight train split every few wagons so smaller trains, like the one you're on, can still travel in reasonable time. The numerous trains could even be sent along different routes, to avoid hogging the one line. Web pages are like this too. They are too big to be sent without delaying others. So each page is split up and sent in tiny pieces, then at the other end they are reassembled for delivery.

So the packets all just fly from computer A to computer B with no problems? Ha! That’d be nice. Unfortunately it’s not that simple. Through various means, there are some problems that can affect packets. These problems are:

If we didn’t try to fix these, the image wouldn’t load, bits would be missing, corrupted, or computer B might not even recognise what it is!

So, TCP is a protocol that solves these issues. To introduce you to TCP, play the game below, called Packet Attack. In the game, you are the problems (loss, delay, corruption) and as you move through the levels, pay attention to how the computer tries to combat them. Good luck trying to stop the messages getting through correctly!

Packet Attack is a direct analogy for TCP and it is intended to be an interactive simulation of it. The Packet Creatures are TCP segments, which move between two computers. The yellow/gray zone is the unreliable channel, susceptible to unreliability. That unreliability is the user playing the game. Remember from the key problems of this topic on the transport level, we have delays, corruption and lost packets, these are the attacks; delay, corrupt, kill. Solutions come in the form of TCP mechanisms, they are slowly added level by level. Like in TCP, the game supports packet ordering, checksums (shields), Acks and Nacks (return creatures) and timeouts. 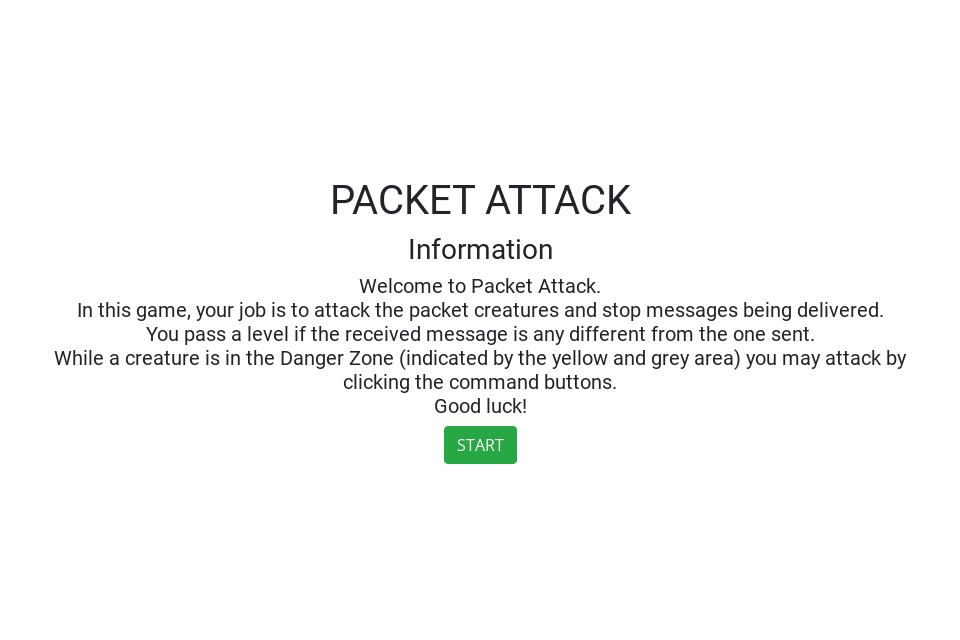 Let’s talk about what you saw in that game. What did the levels do to solve the issues of packet loss, delay (reordering) and corruption? TCP has several mechanisms for dealing with packet troubles.

Firstly, TCP starts by doing what is known as a handshake. This basically means the two computers say to each other: "Hey, we’re going to use TCP for this image. Reconstruct it as you would."

Next is Ordering. Since a computer can’t look at data and order it like we can (like when we do a jigsaw puzzle or play Scrabble™) they need a way to "stitch" the packets back together. As we saw in Packet Attack, if you delayed a message that didn’t have ordering, the message may arrive like "HELOL". So, TCP puts a number on each packet (called a sequence number) which signifies its order. With this, it can put them back together despite the order in which packets arrive. It’s a bit like when you print out a few pages from a printer and you see "Page 2 of 11" on the bottom. Now, if packets do become out of order, TCP will wait for all of the packets to arrive and then put the message together.

Another concept is checksums. This concept of storing information about the data may be familiar from the error control coding chapter. Basically, a checksum can detect errors and sometimes with coding schemes, can correct them. In the case of a correctable packet, it is corrected. If not, the packet is useless and needs to be resent. In the game, shields represent checksums. Corrupt a checksum once, and it can recover from the error using error correction. Corrupt it again and it can’t.

So how do packets get re-sent? TCP has a concept of acknowledgement and negative acknowledgement messages (ACK and NACK for short). You would have seen these in the higher levels of the game as the green (ACK) and red (NACK) creatures going back. ACKs are sent to let the sender know when a packet arrives and it is usable. Nacks are sent back when a packet arrives and is damaged and needs resending. ACKs and and NACKs are useful because they provide a channel in the opposite direction for communication. If computer A receives a NACK, it can resend the message. If it receives an ACK, the computer can stop worrying about a resend.

But does a computer send it again if it doesn’t hear back? Yes. It’s called a timeout and it’s the final line of defense in TCP. If a computer doesn’t get an ACK or a NACK back, after a certain time it will just resend the packet. It’s a bit like when you’re tuning out in class, and the teacher keeps repeating your name until you answer. Maybe that’s been you… whoops. Sometimes, an ACK might get lost, so the packet is resent after a timeout, but that’s OK, as TCP can recognise duplicates and ignore them.

So that’s TCP. A protocol that puts accurate data transmission before efficiency and speed in a network. It uses timeouts, checksums, acks and nacks and many packets to deliver a message reliably. However, what if we don’t need all the packets? Can we get the overall picture faster? Read on…

UDP (User Datagram Protocol) is a protocol for sending packets that does not guarantee delivery. UDP doesn’t guarantee against lost packets, duplicate packets or out of order packets. It just gets the bulk of the data there when it can. Checksums are used for data integrity though, so they have some protection. It’s still a protocol because it has a formal packet structure. The packets still include destination and origin as well as the size of the packet.

So do we even use such an unreliable protocol? Yes, but not for anything too important. Files, messages, emails, web pages and other text based items use TCP, but things like streaming music, video, VOIP and so on use UDP. Maybe you’ve had a call on Skype that has been poor quality. Maybe the video flickers or the sound drops for a split second. That’s the effect of packets being lost. However, you still get the overall picture and the conversation you’re having is successful.