The question now is, how did the magician know which card had been flipped without seeing the card being flipped, or memorising the layout?! The short answer is error control coding. Let's look more closely at that…

Carrying out the parity trick

In the following interactive, the computer has a 7x7 grid of black and white cards. You must choose the colour of an extra card for each row (at the right) and column (at the bottom), making an 8x8 grid of cards. Each extra card should be chosen so that each row and column has an even number of black cards (since there are 8 cards, there will also be an even number of white cards). The bottom right-hand card can be chosen from either its row or column; they should both give the same colour.

Once you think you have this correct, you should tell the computer to flip a card. An animation will appear for a few seconds, and then the cards will reappear with one card flipped (all the rest will be the same as before). Your task is to identify the flipped card. You should be able to do this without having memorised the layout. Remember the pattern you made with the extra cards you added? That's the key to figuring it out. Once you think you have identified the card, click it to see whether or not you were right. The interactive will guide you through these instructions. If you are completely stuck identifying the flipped card, a hint follows the interactive, although you should try and figure it out for yourself first. Make sure you add the extra cards correctly; the computer won’t tell you if you get them wrong, and you probably won’t be able to identify the flipped card if the extra cards aren't chosen correctly. 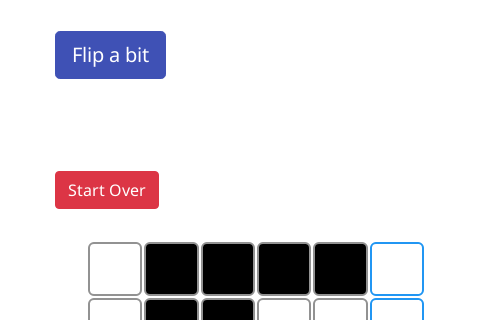 What we saw above is a simple error control coding algorithm, known as 2-dimensional parity.

How does the parity trick relate to error control coding?

The cards represent bits, with their two states being black and white (in the "data representation" chapter we looked at how a bit can be stored by anything that can be in one of two states: shiny/not shiny, magnetised/not magnetised, high voltage/low voltage, black/white, etc). The original 7x7 cards that the computer laid out for you could be some kind of data, for example some text represented using bits, or an image, or some numbers. Although they are laid out in a grid, on a computer the rows of bits would be stored or transmitted one after the other (as 8 lots of 8 bits).

The extra cards you added are called parity bits. Parity) simply means whether a number is even or odd (the word comes from the same root as "pair"). By adding the extra cards in a way that ensured an even number of black cards in each row and column, you made it so that the rows and columns had what is called even parity.

When a card was flipped, this simulated an error being made in your data (such as a piece of dust landing on a bit stored on a CD, or a cosmic ray changing a bit stored on a hard disk, or electrical interference changing a bit being sent over a network cable). Because you knew that each row and column was supposed to have an even number of black and white cards in it, you could tell that there was an error from the fact that there was a column and row that had an odd number of black cards in it. This means that the algorithm is able to detect errors, i.e. it has error detection. The specific card that had been flipped was at the intersection of the row and column that had an odd number of black cards and white cards in them, and because you were able to identify exactly which card was flipped, you were able to correct the error, i.e the algorithm has error correction.

If you had not added the parity bits, you would have had no way of even knowing an error had occurred, unless you had memorised the entire layout of cards! And what if more than one bit had been flipped? We'll consider this later.

At this point, you should be able to carry out the parity trick well enough that you can demonstrate that you understand how to do it. The remainder of this section is focussed on exploring further ideas in error control coding related to the parity trick.

It would be ideal to have some physical parity cards at this point that you can layout in front of you and play around with to explore the questions raised.

An error control coding algorithm can often detect errors more easily than it can correct them. Errors involving multiple bits can sometimes even go undetected. What if the computer (or your friend if you were being a magician with actual parity cards) had been sneaky and turned over two cards instead of one? You could start by getting a friend or classmate to actually do this. Repeat it a few times. Are you always able to correct the errors, or do you get it wrong?

Remember that to detect errors using this algorithm, you know that if one or more rows and/or columns has an odd number of blacks and whites in it, that there must be at least one error. In order to correct errors you have to be able to pinpoint the specific card(s) that were flipped.

Are you always able to detect when an error has occurred if 2 cards have been flipped? Why? Are you ever able to correct the error? What about with 3 cards?

It turns out that you can always detect an error when 2 cards have been flipped (i.e. a 2-bit error), but the system can't correct more than a 1-bit error. When two cards are flipped, there will be at least two choices for flipping two cards to make the parity correct, and you won't know which is the correct one. With a 3-bit error (3 cards flipped), it will always be possible to detect that there is an error (an odd number of black bits in at least one row or column), but again, correction isn't possible. With 4 cards being flipped, it's possible (but not likely) that an error can go undetected.

There is actually a way to flip 4 cards where the error is then undetected meaning that the algorithm will be unable to detect the error. Can you find a way of doing this?

With more parity cards, we can detect and possibly correct more errors. Let's explore a very simple system with minimal parity cards. We can have a 7x7 grid of data with just one parity card. That parity card makes it so that there is an even number of black cards in the entire layout (including the parity card). How can you use this to detect errors? Are you ever able to correct errors in this system? In what situations do errors go undetected (think when you have multiple errors, i.e. more than one card flipped).

Try a 6x6 grid with parity cards to make it 7x7. The parity cards simply need to make each row and column have an even number of black cards (in this case there will always be an odd number of white cards in each row and column). The error detection is then looking for rows and columns that have an odd number of black cards in them (but an even number of white cards). Interestingly, the grid doesn’t even have to be a square! You could use 4x7 and it would work!

There's also no limit on the size. You could create a 10x10 grid (100 cards), and still be able to detect which card has been flipped over. Larger grids make for an even more impressive magic trick.

Previous:
What's the big picture? Next:
Check digits on barcodes and other numbers