Complexity is an important concept with problems and algorithms that solve them. Usually complexity is just the amount of time it takes to solve a problem, but there are several ways that we can measure the "time". Using the actual time on a particular computer can be useful, but to get a rough idea of the inherent behaviour of an algorithm, computer scientists often start by estimating the number of steps the algorithm will take for n items. For example, a linear search can end up checking each of n items being searched, so the algorithm will take n steps. An algorithm that compares every pair of values in a list of n items will have to make comparisons, so we can characterise it as taking about steps. This gives us a lot of information about how good an algorithm is without going into details of which computer it was running on, which language, and how well written the program was. The term complexity is generally used to refer to these rough measures.

Having a rough idea of the complexity of a problem helps you to estimate how long it's likely to take. For example, if you write a program and run it with a simple input, but it doesn't finish after 10 minutes, should you quit, or is it about to finish? It's better if you can estimate the number of steps it needs to make, and then extrapolate from the time it takes other programs to find related solutions.

If you've studied algorithms, you will have learnt that some sorting algorithms, such as mergesort and quicksort, are inherently faster than other algorithms, such as insertion sort, selection sort, or bubble sort. It’s obviously better to use the faster ones. The first two have a complexity of time (that is, the number of steps they take is roughly proportional to ), whereas the last three have complexity of . Generally the consequence of using the wrong sorting algorithm will be that a user has to wait many minutes (or perhaps hours) rather than a few seconds or minutes.

Here we're going to consider another possible sorting algorithm, called permutation sort. Permutation sort says "Let’s list all the possible orderings (permutations) of the values to be sorted, and check each one to see if it is sorted, until the sorted order is found". This algorithm is straightforward to describe, but is it any good?

For example, if you are sorting the numbers 45, 21 and 84, then every possible order they can be put in (that is, all permutations) would be listed as:

Going through the above list, the only line that is in order is 21, 45, 84, so that's the solution. It's a very inefficient approach, but it will help to illustrate what we mean by tractability.

In order to understand how this works, and the implications, choose four different words (in the example below we have used colours) and list all the possible orderings of the four words. Each word should appear exactly once in each ordering. You can either do this yourself, or use an online permutation generator such as JavaScriptPermutations or Text Mechanic.

For example if you had picked red, blue, green, and yellow, the first few orderings could be:

They do not need to be in any particular order, although a systematic approach is recommended to ensure you don’t forget any!

Once your list of permutations is complete, search down the list for the one that has the words sorted in alphabetical order. The process you have just completed is using permutation sort to sort the words.

Now add another word. How many possible orderings will there be with 5 words? What about with only 2 or 3 words – how many orderings are there for those? If you gave up on writing out all the orderings with 5 words, can you now figure out how many there might be? Can you find a pattern? How many do you think there might be for 10 words? (You don’t have to write them all out!)

For factorials of larger numbers, most desktop calculators won't work so well; for example, has 158 digits. You can use the calculator below to work with huge numbers (especially when using factorials and exponents). 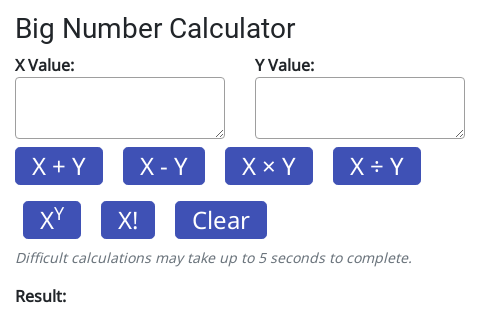 Try calculating using this calculator – that's the number of different routes that a travelling salesman might take to visit 100 places (not counting the starting place). With this calculator you can copy and paste the result back into the input if you want to do further calculations on the number. If you are doing these calculations for a report, you should also copy each step of the calculation into your report to show how you got the result.

There are other big number calculators available online; for example, the Big Integer Calculator. Or you could look for one to download for a desktop machine or smartphone.

And as an interesting thing to think about, do some calculations based on the assumptions listed below. How long would it take to use permutation sort on 100 numbers? What would happen first: the algorithm would finish, or the universe would end?

By now, you should be very aware of the point that is being made. Permutation sort is so inefficient that sorting 100 numbers with it takes so long that it is essentially impossible. Trying to use permutation sort with a non trivial number of values simply won’t work. While selection sort is a lot slower than quicksort or mergesort, it wouldn’t be impossible for Facebook to use selection sort to sort their list of 1 billion users. It would take a lot longer than quicksort would, but it would be doable. Permutation sort on the other hand would be impossible to use!

At this point, we need to now distinguish between algorithms that are essentially usable, and algorithms that will take billions of year to finish running, even with a small input such as 100 values.

Computer scientists call an algorithm "intractable" if it would take a completely unreasonable amount of time to run on reasonably sized inputs. Permutation sort is a good example of an intractable algorithm. The term "intractable" is used a bit more formally in computer science; it's explained in the next section.

But the problem of sorting items into order is not intractable – even though the permutation sort algorithm is intractable, there are lots of other efficient and not-so-efficient algorithms that you could use to solve a sorting problem in a reasonable amount of time: quicksort, mergesort, selection sort, even bubble sort! However, there are some problems in which the ONLY known algorithm is one of these intractable ones. Problems in this category are known as intractable problems.